I meant to be better about posting this month, I really and truly did. Thankfully, I have managed to get a good chunk of writing done this month, getting 3,900 words written on Turrim 2 (I have a working idea for a title, but I’m not sure I want to share it just yet… in case it doesn’t take). And I finally got my spooky story for the blog challenge written, which I’ll be sharing on Monday. Don’t forget to write and link up your own spooky story by October 31st! And check out the other stories, as well. Savannah @ Scattered Scribblings was super on the ball and already posted hers, and it is deliciously creepy! Mine… will not be that creepy, as I went with a bit of a lighter flavor… having no appropriately chilling ideas. But hopefully you’ll still enjoy it!

I am not planning on doing Nanowrimo this year… I would love to, but knowing that we’ll be gone the last week and a half of November, and knowing how stressful that looming word-count can be for me, I know it wouldn’t be a good idea to even try. I am hoping to join you all in spirit, though, while I wait for Minstrel’s Call to come back from the editor’s, and I have a goal of my own to get a good amount of writing done in the month of November. Not 50,000 words. No, but perhaps I can manage a modest 10,000, if I buckle down and focus. So, as I gear up with you for my own mini-version of Nano, I thought I’d jump in and do the beautiful books linkup for October hosted by Cait at Paper Fury and Sky at Further Up and Further In.~ 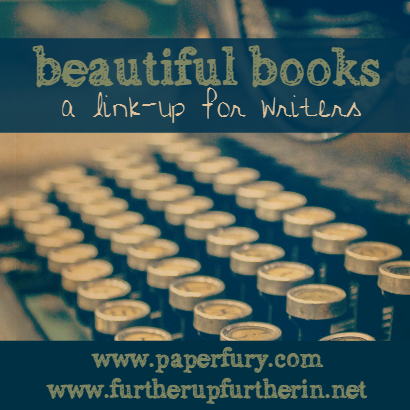 What inspired the idea for your novel, and how long have you had the idea?

The idea wasn’t originally mine to begin with at all. It came about because my husband began creating a world and a story way back in the early years of our marriage, maybe 11-12 years ago, now. He created a map and a history for the world, and we had long discussions about it, but it was very much something I thought of as “his.” He asked me a couple of times if I would ever be interested in writing a story in that world, and I repeatedly told him, “No.” I did not want to attempt to write a story in a world and system he had created because I feared I would be forever “getting it wrong.” I loved the idea of the world and the history, and helped a lot with the construction of that history, but refused to write a story in it.

Finally, Derek asked me what the issue was and I told him. At which point he assured me that if I wanted to write a story in his world, I had carte blanche to write whatever story I wanted, and I didn’t even have to use the histories or the characters he had created. He told me he just enjoyed building the world, but had no intention of ever writing a story for it. So… the adventure began! And it has been quite a lot of fun writing in a world that was already quite fleshed out before I ever started working on it… which is also the story of how Derek became my world-builder-technician. I did end up using a lot of the history he had created and even a few of his characters, so really, he should get some sort of creative credit on this next series!
Describe what your novel is about!

As the second book in this series, the story picks up pretty close to where Orb and the Airship leaves off. The main characters must deal with the aftermath of what happened in the first book, the country is preparing to go to war, and Dalmir realizes that he needs to look for some powerful objects that have gone missing.
What is your book’s aesthetic? Use words or photos or whatever you like!

Introduce us to each of your characters!

Dalmir – seemingly ancient man who lives alone in a tower… later discover that he is much younger-looking than he first appeared. Mysterious, wise, extremely moody and brooding, seems to carry the weight of the world on his shoulders

Grayden – young man entering the Academy, comes from the small rural town of Dalsea where his family owns a large fruit orchard. Serious, studious, natural leader, though he is uncomfortable being in that role

Wynn - Grayden’s best friend and comrade, entering the Academy with Grayden. Brilliant, quick-witted, playful – probably one of the smartest people in the world, but hides it by being a goof-ball because he’s pretty much always bored. Seeking a true challenge.

Beren – from Telsuma, meets Grayden and Wynn on the way to the Academy and becomes friends with them quickly. Massively tall and broad-shouldered, Beren is earnest and somewhat naive, and has a very good sense of decorum and knows when to speak and how to diffuse tense situations.

Marik - originally from Vallei, now an airship pirate, he is roguish and suave. With his good looks, easy smile, charming demeanor and strategic brilliance, he is a legend among the underworld. Able to pull off even the most complicated heists, Marik could be a leader, or king, of thieves. However, he carries with him a dark grudge, and uses piracy more as a means to a vengeful end.

I have lots of other side characters, but those are the main ones. Honestly, it’s really odd to me to have such a small major cast. I have plenty of secondary characters as well, but they don’t quite merit introduction.

How do you prepare to write? (Outline, research, stocking up on chocolate, howling, etc.?)

I have some pretty in-depth outlines for these books. I believe it will be a 5-book series, as I have outlined that many books, and it should wrap up nicely at 5 books.

This has also been a research-intensive series, compared to my other works, so far. Since I have six countries that I am trying to present in a world that is very divided (but all on the same continent, unlike in the Minstrel’s Song), I have been doing a lot of research into various cultures and customs (all in the 1700-1800 time period) of our own world so that I can add a layer of authenticity to this realm. I want it to feel like a real world, with varying types of food and dress and architecture, and that has required a ton of research.

I also have found that writing with my pen in a notebook is working better with this story than drafting on my computer, which makes the process take a bit longer, but not as long as it would take if I just stared at my blank screen for hours!
What are you most looking forward to about this novel?

I am looking forward to sharing it with my readers! That’s the part I always look forward to the most. I’m also looking forward to writing the big climactic episodes of book 2 (my current WIP) because they promise to be pretty fun scenes/bits to write.
List 3 things about your novel’s setting.

Six different countries, all on the verge of war

Mountains play a big role in this particular book
What’s your character’s goal and who (or what) stands in the way?

Grayden and his classmates are sent on an arduous orienteering mission in order to advance to their next level of study. However, once they arrive at the specified location, everything goes wrong. It is up to them to make it out of the mountains safely with no guide and no support. Along the way, they will also stumble across a deadly secret which their leaders must be informed of, if they can only make it out of the mountains alive!
How does your protagonist change by the end of the novel?

Grayden does not consider himself to be a leader, especially because he is only an initiate at the Academy. However, events are going to force him to make some big decisions for himself and his classmates. Whether he rises to the need or not… well, that’s why you’ll have to read the book!
What are your book’s themes? How do you want readers to feel when the story is over?

As always, a major theme in the story is good versus evil. But there are also themes of vengeance vs. forgiveness, setting aside one’s own desires for the greater good, doing the right thing even when it’s hard, betrayal, and learning to take the risk of trusting someone else – even someone who has betrayed you in the past.

I hope that readers feel exhilarated when they finish this story, as well as eager to read the next one! I hope it leaves them with a desire to spend more time with these characters and in this world.

Hopefully something in there is intriguing. Are any of you doing Nano? Unofficially participating like me? Plugging away at writing something through the month of November but ignoring Nano? I’d love to hear about your projects!

This series looks so GOOD.

I agree in full!

Best of luck writing it, Jenelle!

Thanks!!! Hoping to get some good progress made in the next couple of weeks… once the heart attack that is my Cubbies is decided for the year, that is…