We are halfway through the Silmarillion Award Presentations. I hope you are enjoying them as much as I am, dear Reader! So far we’ve seen:

Wisest Councillor - Gandalf brought his fireworks!
Least Competent Henchman - many shenanigans over there. Not sure if Kyle has been able to get rid of all his houseguests yet..
Most Silver Tongue - presented in the form of a riddle. Most appropos!
Most Epic Hero - chronicled by a most entertaining short blogger.
And today we will see who has the dubious honor of being named this year’s Strangest Character!

And next week the fun continues!

But until then… today’s regularly scheduled programming…

This week’s movie is the sort of movie that always inspires me, particularly when I start to feel down. I think I may need to re-watch one of them this weekend, because that’s just the kind of week I’ve had. It’s been a stressful, emotional, roller coaster of a week, and I am WORN OUT, y’all. By Wednesday morning, I was ready for the week to be over. And it wasn’t… it just kept going. Thankfully, it is finally Friday! Huzzah! *halfheartedly throws confetti because I am too exhausted to properly celebrate*

But you didn’t come here to listen to me whine. You came for a movie recommendation. And this week, you get two! 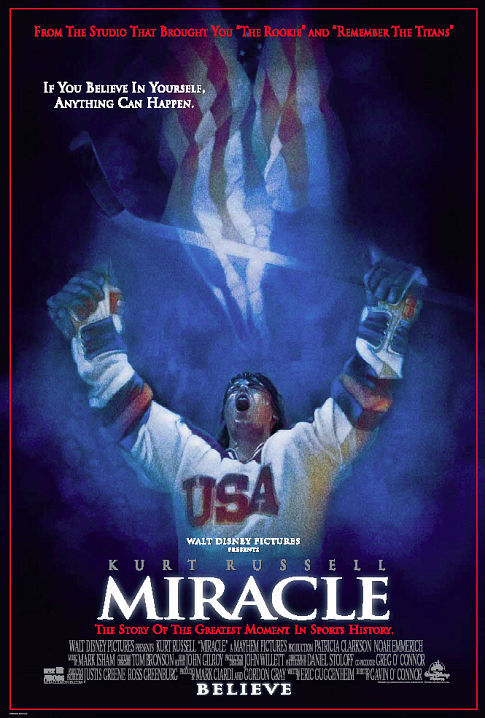 You are probably familiar with this movie. It was a big hit when it came out. Miracle a movie based on the true, epic story of the 1980-USA Olympic Hockey team. I grew up watching the story of the 1980s USA Olympic Hockey team, and even though I wasn’t born yet during that amazing year that held the country — and the world — spellbound, I have loved this story for my whole life.

Featuring the brilliant acting of Kurt Russell (hmm, are we seeing a bit of a trend here?) as Herb Brooks, the coach of said team, and a fabulous supporting cast, this movie will have you on the edge of your seat every single time you watch it. Knowing the end does not make it any less of a thrilling or gripping tale.

With an unforgettable script filled with lines like this one:

One of my favorite things about this movie, however, has nothing to do with hockey. It is Patricia Clarkson’s beautiful rendition of Patti Brooks, Herb’s wife. Her support and understanding of her husband and his passion and her willingness to cheer him on to the finish line throughout all the ups and downs is one of the best things about this movie.

If you like movies such as “The Rookie” or “Remember the Titans” or “We Are Marshall” – you will love this one! You can rent it online at various places… but seriously… just go buy it. This is one you’ll want to watch over and over again.

But, wait, Jenelle. Miracle only came out in 2004. I mean, that was the year you graduated college! You can’t possibly have grown up watching this movie! So… what did you mean?

That is an excellent question, and I’m so glad you asked it!

In 1981, only a year after the event itself, a different movie was produced about this amazing team. It was called Miracle on Ice, starring Karl Malden as Herb Brooks. I can’t even tell you how many times I’ve watched this movie. But I can tell you that it stands the test of time. Netflix used to have this movie available to stream and I introduced my husband to it a few years back (who is rather a bit pickier about the quality of movies than I tend to be) and upon watching it, he said he would be hard-pressed to say which one he enjoyed more.

There is a lot of overlap, of course, but there are also parts in each movie that the other does not have. This makes it very hard for me to even decide which I prefer. And I like that, because it means I can watch both movies, and get something different out of each one.

While the 2004 version gives you an amazing amount of insight into the life and struggles of Herb Brooks himself, the 1981 version focuses a lot more on the team. Particularly Mike Eruzione (Rizzo) – who is my favorite. (I won’t lie, this movie MAY just be rather influential in the reason why I have such a soft spot for the Cubs’ current 1st-baseman, Anthony Rizzo). It also goes a bit deeper into the struggles that Herb Brooks experienced with each cut he had to make from the team and how he agonized over those cuts.

One of my favorite parts in Miracle on Ice is when Herb Brooks is telling Eruzione that he is being hard on him for the sake of the team. I can’t find the quote exactly… so I’m doing this from memory:

Mike glares and gets up to leave.

HERB: “You can tell Craig that, as well.”

The other fun thing you get in Miracle on Ice is a ton of actual footage from the actual 1980 Olympics and the sportscasters. So that is fun.

Unfortunately, this is an extremely hard-to-find movie, like I said, it used to be on Netflix, but isn’t anymore. If anyone happens to find it on DVD and wants to send me a birthday present…. I wouldn’t turn it down!

So, in conclusion… no, there is too much. To sum up, then:

I love both these movies very much. I recommend them both as highly as I can.

Ooh, these look interesting! Me and my family are not much for sports movies, but we might have to look into these ones!