My top five favorite book heroes or heroines and why I love them. Aragorn from Lord of the Rings

Of course Aragorn has to top the list. A mysterious ranger with a wry sense of humor, devotion to duty, awareness of his own mistakes, and an ancient sword. He must take actions to fight evil and reclaim his rightful throne…. What’s not to love?

My favorite quote from Aragorn is, of course, the one they left out of the movie (mostly, they “nodded” to it, but in doing so they detracted from Aragorn’s sense of humor, which I didn’t appreciate). The line from the book is:

Frodo – “Well, if he was one of the enemy, he would look fairer and…well, feel fouler, if you see what I mean.”

Aragorn – (laughing) “While I look foul and feel fair, is that it?”

In the movie, it’s not a humorous line at all, just a sort of matter-of-fact statement from Frodo to Sam that Aragorn either doesn’t hear or doesn’t choose to reply to.

Bean from the Ender’s Game series

A small-for-his age child genius who grew up on the streets and ends up in a space station orbiting Earth learning tactics to fight an alien race who may be planning to invade and destroy humanity at any moment.

Most people love Ender. I prefer Bean. I find his story far more compelling, probably because he has so much less going for him. Despite the loneliness that Ender feels, Bean is truly alone. Despite Ender’s brilliance, Bean is the explorer, the kid who figures out how to get into the air ducts and spy on the teachers, learn their computer passwords, and getting into trouble. He is the one without whom, in the end, Ender would never have succeeded. Despite his hero worship of Ender and his jealousy at the love and respect Ender commands from his troops… Bean ends up commanding that same devotion and loyalty when they return to Earth (in later books in the “Ender’s Shadow” series. In the end of it all, Bean is the character who strikes me as more human, with higher hurdles to overcome, and therefore the more admirable of the two characters. (Doesn’t mean I don’t love Ender, I just love Bean more).

Haplo from the Death Gate Cycle

Fiercely independent, magically powerful, loyal to the wrong side at the start of the series, there’s something about the fact that Haplo starts out as the “bad guy” that just makes me love him all the more. Maybe it’s because I enjoy a redemption story. Maybe it’s because I love that Haplo is too smart not to figure out that he’s fighting for the “wrong” side. Whatever it is, Haplo is one of my all-time favorite literary characters, and the main reason I own and love to re-read this series. (There are no good pictures of Haplo…) 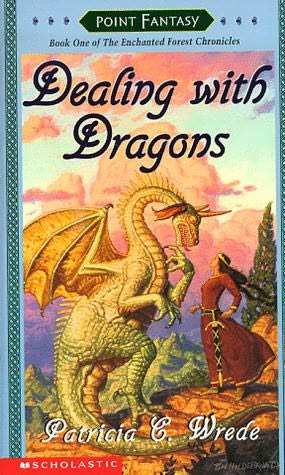 Cimorene from the Enchanted Forest Chronicles

If I was going to be best friends with a literary character, it would be Cimorene. A princess who runs away from an arranged marriage straight to a den of dragons where she asks that one of them “kidnap” her, this is not your typical fairy tale, nor your typical fairy tale princess. Sarcastic, pragmatic, and perfectly capable of handling anything that comes her way (yet not too proud to ask for help when she needs it). She knows a little bit of everything from cooking, to sword-fighting, to magic, to diplomacy. She is fiercely loyal, creative, and more than able to “think outside the box.” Cimorene is another character that I return to read over and over again, because I enjoy spending time with her, and because she makes me laugh.

Edmund from The Chronicles of Narnia

I know, I know, Lucy is everybody’s favorite. Well, Lucy is the person I would love to BE… but Edmund is the one I relate to. Again, I fall for an excellently told redemption story every time. What I love about Edmund is not his treachery, nor his unkindness at the beginning of The Lion, the Witch, and the Wardrobe… it is how completely he transforms when Aslan saves him. When they return to Narnia in Prince Caspian, though Lucy is the first to actually SEE Aslan, Edmund is the first who is willing to believe her, and the only one who sides with her at the beginning. His faith may not be as strong as Lucy’s, but he more than makes up for it with his wanting to believe, and the fact that he knows he can’t trust his own lack of faith…

How about you? Who are some of your favorite literary heroes?

Haha, I love that Aragorn line! I wish they had kept it in the movie…

Aragorn of course. I love Bilbo and Thorin. Alastair Coldhollow from the ‘Dark Sea Annals’ by Wayne Thomas Batson is AWESOME. Edmond Dantes from ‘The Count of Monte Cristo.’ Jack Shreve from ‘The Blood Ship.’ There’s a lot more, but those are the ones off the top of my head.

I know. My other favorite line that they left out of the movie was one by Gandalf… when he confronts Saruman and Saruman is scoffing about a white page being “blank” and how he is now “Saruman of many colors” and Gandalf just sort of snarkily says, “I liked White better.”

Aragon, Gimli and Legolas were my absolute favorite part of the trilogy as a kid, and on several readings I’d skip to their chapters. And the Gandalf bits, naturally. The traditional heroes just had such appeal, and I wanted Gimli to get one up on the darned perfect elf. I also wish they’d played that line as humorous in the movies, but it’s clear Jackson wanted most things to be taken more seriously. Bit of a shame, though there is some good humor in there.

from John at The Bathroom Monologues

I was always skipping to Frodo and Sam… particularly during the Two Towers… despite the fact that everyone else in the known universe seems to think those parts of the story were “boring.”

Yep, there be some heroes. Kinda surprised they didn’t make the cut. Though I’m not sure you’ve read any of the John Clark books.

You’re right, I haven’t read any of the John Clark books. I’ve only read Hunt for Red October… and while I do love the Jack Ryan character from the movies, I felt that he was hardly much of a character in that book, it was far more about Ramius.

Since this is my TOP 5 (and narrowing it down to 5 was nigh-on impossible to begin with, as I could have listed the entire Fellowship from LOTR, but that would have meant I couldn’t talk about characters from any other books!) favorite book heroes, is it any surprise they are from books I’ve read multiple times (and was introduced to at a younger age)?

Love your blog! Following you via email. I see you like your dragons. I’m the same way. In fact, one of my WIPs includes them. Love Aragorn and Edmund. I also love Richard Rahl from the Sword of Truth series, and al’Lan Mandragoran of Wheel of Time. What can I say? I love me some guys with swords.

Thanks for visiting my blog!

I haven’t read Sword of Truth… but I agree, Lan is pretty awesome!

I love Edmund from Narnia too! His flaws and mistakes make him such a rounded hero!

What a brilliant list. I love Edmund the best too. And I haven’t yet read Ender’s Game but I’m going to now!

I liked your hero choices, especially Aragorn and Edmund. They are two of my favourites.

Sir Thomas More of A Man for All Seasons fame.

My fave was Susan. Poor girl got boxed out of heaven after all she did. Aslan’s a meanie.

I think C.S. Lewis didn’t like Susan much… LOL

She was a major jerk to Lucy all throughout the first half of Prince Caspian, which annoyed me.

I don’t necessarily think she got “boxed out of heaven” though… at the end of the Last Battle, she wasn’t on the train that crashed, she was in America… so perhaps she did get to come to Aslan’s country when she died. I’ve always hoped for a better ending for her, myself.

It’s too hard to pick a favorite hero, especially at 1am. I do love Edward from Narnia, too!