To celebrate, I thought I’d share a list of some of my absolute and extremely random favorites from the fantasy genre.

Dragon – this is a hard one, but I’m going to have to go with the dragon from the BBC television series, Merlin. I think the reason I love him so much is

because he’s just so thoroughly DRAGON. He’s willing to talk and can be commanded by certain individuals, but he’s also extremely powerful and, like the Ents from Lord of the Rings, he isn’t quite on anyone’s “side” as nobody is quite fully on HIS “side.” I’m cheating slightly, because it’s not a book…. but it’s too hard to choose. There’s Smaug, of course! And the drakhoun from  the Tears of Artemon by Sarah Ash, and Death-in-Life in Tales of Goldstone Wood, and the Dragon in The Oath, and Strabo from the Magic Kingdom of Landover series, and Kazul from Dealing with Dragons, the dragons in Jane Yolen’s Pit Dragon series, and now I’m falling in love with the dragon from HL Burke’s The Dragon and the Scholar… I just LIKE dragons, okay? I cannot pick. I love them all.

Princess – Cimorene from the Enchanted Forest Chronicles, definitely. She’s so feisty and pragmatic. I love how she can be sarcastic and respectful all at the same time, and how she hates being interrupted when she’s focused on something.

Quote – “It was a sad song, a heartbreaking song, wild and proud… about all the losses a human heart might hold dear and remember. We are alike, you and I, she thought, homeless wayfarers in a world that is not our own.” — Stephen R. Lawhead, Taliesin - something about this quote has always just resonated within my soul with its truth and epic-ness.

Battle - I am going to have to go with the entire book A Memory of Light by Robert Jordan/Brandon Sanderson. The entire Wheel of Time series leads up to this book and the entire book IS a battle… which was, for me, a thoroughly satisfying way to end the story. I didn’t love the way the book ended, but it remains the most impressive battle scene I’ve ever read. Second place would, of course, have to go to the Battle at Helm’s Deep from the Two Towers.

Villain – it might be a bit cliche, but I’m gonna have to go with Voldemort. Not many other villains give me the creeps quite like he does. Sauron definitely takes the “ultimate villain of all time” slot, but for me, he’s just a bit too impersonal and removed from events to be my favorite villain.

Bard – This one has to be a toss up between Fflewddur Fflam from Alexander Lloyd’s Prydain Chronicles and Eanrin from Anne Elisabeth Stengl’s Tales of Goldstone Wood. Very interesting, different, and yet somehow very similar characters and I love them both so much. I tend to have a weakness for “minstrel” type characters (which will come as no surprise to anyone who has read my books!) and it all began with Fflewddur Fflam. Eanrin is a much more recent addition to my favorites list… though it means no less (actually, more!) that he has found a place there.

King – Ben Holiday from Terry Brooks’ Magic Kingdom of Landover series. I love him so very much, and I enjoy that he comes to be king through an extremely random series of events, that he is in no way prepared for the responsibilities involved in being king, and how he rises to the occasion and refuses to give up even when he discovers that his kingdom is on the brink of falling apart. He’s no Aragorn, of course, but he is noble and stalwart and loyal nonetheless.

Cover - Okay, this may not be strictly fantasy, but it is my favorite book cover EVER right after the ones Angelina created for my books and for my Grandma’s book… and I also really love the cover for Five Enchanted Roses, but anything that has my name on it feels like cheating… so… despite the fact that this is more Urban/Gothic than strictly fantasy, it does have a dragon in it, so I always counted it as fantasy. It was an extremely sad day for me when I discovered that this book had undergone a cover change: 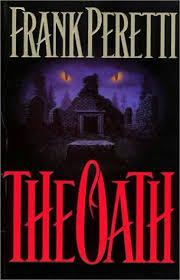 Romance - I’m gonna have to go with the one in Queen of Attolia by Megan Whalen Turner. I love it so much. I’m not going to say anything more about it, because it gives too much of the mystery in the story away… but it’s beautiful… and complicated, and there’s nary a triangle to be seen.

Character - I don’t know why I pick such difficult categories to choose from… but, if I’m honest… probably Haplo from the Death Gate Cycle. (Though there’s a book I’m getting the privilege to Alpha Read and the main character in that definitely has the makings of getting up there very near or possibly at the top of the favorites list… but since that book isn’t published yet, I can’t really say any more about it).

Series – Um. Lord of the Rings. No contest.

And that concludes Fantasy February! I hope you have enjoyed it as much as I have. If you’re worried that the fun has come to an end, fret not! There are some plans coalescing to continue the fun, and to allow you to have an easy, but more active, part in it all. Stay tuned for more information on that!

I shall leave you with this silly clip from one of my favorite, ridiculous movies, Pirates of Penzance and another February 29th birthday:

What are your favorite fantasy things? Feel free to write a blog post about them or just tell me in the comments!

(That is the best that it’s its first birthday. XD)

Ooh, such a great list! I haven’t read/seen all of these…

THAT TALIESIN QUOTE! :O Oh my goodness, I seriously need to read more Stephen Lawhead… I love that quote.

Yes to Bards! They are so marvelous! ^_^ Fflewdur, of course, and I haven’t seen much of Eanrin yet… and Kiernan Kane is a favorite, of course!

This is making me think of my own bard character from Heartseeker, Reldin… I miss that story and should totally go finish it sometime! o.o

I need to read The Queen’s Thief series…

Thanks for sharing, and I quite enjoyed Fantasy February!! ^_^

Happy Leap Day to you, as well!

Stephen Lawhead is… one of my favorite authors. Sigh. And Taliesin is probably my favorite book of his ever – I enjoyed the rest of the series, but Taliesin is something special.

haha. Seriously, you need to finish up some of these stories you’re writing, because all these teases are NOT NICE, I want to read them all!!!!!

*bumps it up higher on my to-read list* That and two of his trilogies (Hood, and Dragon King) are patiently waiting on my shelf, waiting to be read…

Oh my goodness, I’m sorry! o.o Didn’t mean to be a tease.

I’m sorry, I will totally finish them sometime! (Thank you though!!! You da sweetest! ^_^ And I’m honored they interest you. :))

I haven’t read too much about Eanrin yet, but I have a feeling I’m going to like him a lot…

I love the Five Enchanted Roses cover too! I’m getting really excited about Five Magic Spindles… ^_^

Thanks! Eanrin is awesome!! He’s my favorite.

I’m getting excited about Five Magic Spindles, too! That has a very lovely cover, as well. I’m excited about the winner announcement tomorrow!

I think of Pirates of Penzance every Leap Day!

LOTR is obviously the best. But I love Taliesn and the whole King Arthur series by Lawhead! So epic! Your fantasy February was awesome!

Nice to know I’m not alone!

Yay for all fantasy! I’m glad you enjoyed Fantasy February!

What a birthday to have: leap day! Was that planned or a fun coincidence?

Yay for Merlin and LOTR! Oh and I’m glad to hear that Wheel of Time’s last book is good. I’m on book #7, I think, and I’ve been hoping the ending will be worthwhile.

It was kind of both! I was very pregnant with my second daughter (her due date was March 8) but since her older sister was 6 days early, I didn’t think it was outside the realm of possibility that she’d be a “leap baby” – King’s Warrior just sort of happened to be ready on Feb. 29th. Nathalie came three days later, which I was kind of bummed about at the time… but I got one “leap baby” anyway

I enjoyed the end of Wheel of Time… particularly the last 3-4 books. You’re right in the middle of where I think the story gets ridiculously convoluted and slow as all get-out… but I do think the series is worth the trodgy (trudging and slogging combined) bits… which, unfortunately, I would say are books 7-10. :-/ Though I think that now that they’re all out it’s not as bad… when I was reading them, I often had to wait a year or three for the next book to come out, and that was the WORST!

Happy birthday to King’s Warrior (even if I am a few days late)!