“Oh better far to live and die under the brave black flag I fly, than play a sanctimonious part with a pirate head and a pirate heart!”

When I was little, my favorite thing in the world to do was play “make believe” with my cousins. There were 8 of us girls within 4 years of each other. We were best friends and we had extremely overactive imaginations.

Our favorite game to play was often one in which we were orphans and had to run away from the evil orphan keeper. Inevitably, we always ended up disguising ourselves as boys and hiring ourselves onto some ship… which always ended up being a pirate ship (though we didn’t know it until we were out to sea).

Childhood games are what started my love for pirates. Later, this love was fueled through the years by movie characters, such as:

I mean, nothing is much cooler than a man in black, wearing a mask, with the ability to beat the best swordsman on earth, wrestle a giant, has an immunity to the deadliest poison known to man, is able to withstand torture, and always gets the girl…. especially if he’s also a pirate. (A reluctant pirate, perhaps…. but still a pirate)

I also loved the idea of the “name” of a pirate being passed along through the ranks so that the original “Dread Pirate Roberts” is actually retired and living the high life on some remote island. 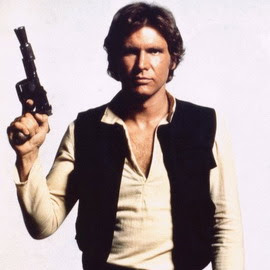 Come on, who didn’t want to be Han Solo when they grew up? Cool customer, ace pilot, crack shot, witty sense of humor, and all the bluster you could wish for. And, yes, Han shot first. I have the VHS tapes that prove it.

What’s a post about pirates without Cap’n Jack Sparrow? Seriously, I love these movies. Yeah, they’re silly, but there’s nothing wrong with silliness. Especially when it’s accompanied by swashbuckling swordfights, buried treasure, and the open sea.

Space pirate. (Or space cowboy… which ends up amounting to the same thing). There are very few characters I love as much as I love Mal. Despite the fact that he’s an outlaw, his heart is in the right place. He’s fighting a corrupt government, and he never lets his own interests get in the way when someone else is honestly in trouble.

Hmmm, are we sensing a trend here? What do all these pirates have in common? A good heart. Yep, they’re all softies on the inside… hidden heroes inside a swaggering, high-ego, sarcastic shell.

There’s nothing wrong with a great pirate “bad guy” though, either. There’s something sinister and shivery about a truly evil pirate. That kind of character might be fun to write someday, too.

“Now, bring me that horizon.”

Bonus points if you know the name of the last pirate. And if you know where all the quotes in this post came from.

How about you? Who’s your favorite pirate?

I love pirates too, as you already know. I love how you can make them anything; silly, evil, dashing, whatever. The first novel I wrote was a pirate novel, and it was one of the most fun things I have ever written. I am seriously looking forward to your new book! It sounds epic!

I am really having fun writing my new book. This blogging challenge is killing me (though I’m enjoying it greatly), but I think it’s been good for letting all my ideas for this story percolate a bit. I’m hoping to have the rough draft finished by the end of the summer.

I would love to read your pirate novel, at some point.

Am I allowed to guess the name of that last pirate????

I know you know the name of the last pirate!

Gosh – no idea who the last pirate is. I seem to be surrounded by them at the moment as I edit my writer friend’s book – yes you guessed, a book about pirates, oh and a talking cat!

I do love my heroes tough on the outside and all ooey-gooey on the inside. And the Princess Bride is definitely one of my favorite movies. Alas, I don’t recognize that last pirate picture.

Hope you’re having fun with the A to Z challenge,
Jocelyn

Jack Sparrow and Mal would sure be tops on my list.