I wanted to spend some time on which books I would recommend to someone new to the fantasy genre. This is a bit different than a list of my Favorite Books or even my Recommended Reads, though you will notice some overlap. This is more of a list of suggestions I would give to someone just wanting to try out the fantasy genre for the first time.

I would highly recommend this trilogy to anyone interested in beginning a life-long love of the fantasy genre. The books are not long, it’s a self-contained trilogy, and the story is truly fantastic. Two friends end up accidentally crossing over from our world into an ancient, Celtic land full of mystical magic and acts of valour. I especially love the way this entire trilogy ends with a powerful, but subtly handled, message of Christ’s redemption and the call to believers to “go into all the world and preach the good news to all creation.” Disclaimer: I forgot about this when I was writing the post, but there is a sort of “sex scene” between two married characters in this series. Not explicit, but there. 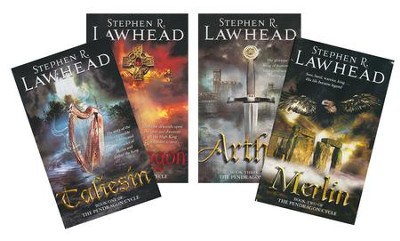 Also by Stephen R. Lawhead, another fantastic series to start with would be his Pendragon Cycle. This is more of a straight-up retelling of the King Arthur legends, a staple to much of the fantasy fiction realm!

For the younger reader, I would definitely recommend this series:

The Chronicles of Prydain by Lloyd Alexander is a story of high adventure filled with humor and danger and true friendship. It is also a beautiful tale about a character in search of finding out who he truly is. It contains a lot of subtle (and not so subtle) nods to JRR Tolkien, but that only serves to make it all the more lovable.

Another excellent choice would be the Earthsea trilogy by Ursula K. LeGuin Follow the reckless young Sparrowhawk as he travels the world in search of power and knowledge. Perch on the edge of your seat as he tampers with secrets too big for himself and looses a terrible shadow upon the world and has to atone for his rash actions. For one day, he will be called the greatest sorcerer in all of Earthsea… if he can survive long enough to gain the wisdom he lacks.

Okay, I had to come back and put a few more in, because I was in a bit of a hurry when I wrote the post yesterday!

This was recommended to me by one of my students when I was teaching and I completely fell in love with the series! I believe a fifth book is either out or on its way, which is super exciting! I love stories that “aren’t finished yet” when I discover them, it means I get to spend more time with the characters than I expected.

Full of hilarity, intrigue, daring heroics, and a touch of romance, this series is fun for everyone. The main character is Eugenides, a thief, but not just any thief. He is the Queen’s Thief, which means that he sneaks around, steals stuff (much of it information), and generally creeps along rooftops at the Queen’s behest. But when he falls in love, chaos threatens. I won’t tell you any more, I intend to review this series soon… but it’s well-worth the read. The first book is “The Thief” and it is the weakest book in the series, but provides some very important background information that might leave you confused if you choose to skip it. There is a pantheon of gods and goddesses in this story that the characters believe in and who to some minor extent do appear (one appears to Eugenides in the first book, but they are sort of a “distant force”). As far as I know, it’s a made-up pantheon.

It wouldn’t be a complete list without the Enchanted Forest Chronicles.

Absolutely hysterical, but also poignant and heroic and witty and just plain fun. I’ve talked about these books a lot here, so I won’t go into them too much, but this is a series I can recommend whole-heartedly without any caveat (besides: does contain magic and dragons because: fantasy and see title).

And finally, a much more recent addition to my bookshelves, but I would definitely recommend the Tales of Goldstone Wood to any reader looking to explore new fantasy realms. I know that Anne Elisabeth Stengl says you can read them in any order, but I highly recommend reading them in published order!

These have a much more “fairy tale” feel to them, but are marvelous stories set in a fantastical world that is bordered by the Goldstone Wood, a land of faeries and magic and all sorts of forces both good and evil. All is ruled by the King of the Farthest Shore (the God figure) and his Son, Prince Aethelbald, who is a sort of Christ character in the stories who helps the characters and leads them on his Path. Sometimes the characters stay on the Path and sometimes they wander other paths, but every story is filled with excitement and deeper themes and suspense, as well as characters you will fall in love with and plots that will leave you breathless as you navigate their twists and turns!

Of course, there could be very few other stories better to start off one’s foray into fantasy fiction than this set:

The Chronicles of Narnia is such an excellent series that not only contains brilliant characters, solid allegory, and truly fantastical adventures, but the stories are also short and easy to read. It can also be read in several different orders (personally, I prefer strictly chronological, which requires the reader to put down Lion, the Witch, and the Wardrobe before the final chapter and read The Horse and His Boy before going back and finishing LWW… but that’s because I’m a complete and total nerd, and is in no way a requirement!)

And of course, you know it wouldn’t be a very good list if it didn’t include the ultimate introduction to the fantasy genre: “In a hole in the ground there lived a hobbit.” If there’s anything I’ve noticed about people who love fantasy it’s that we all seem to have “started” in the same place. With The Hobbit and The Chronicles of Narnia. Hobbits, dwarves, elves, kindly old wizards, men who turn into bears, giant spiders, a treasure hunt, a ring of invisibility, riddles, revenge, and dragons! Really, what more needs be said?

There are quite a few others, but this is definitely the list I would start with! How about you? Which fantasy book caused you to fall in love with the genre? Which books would you recommend to someone interested in reading fantasy for the first time?

I actually found The Song of Albion Trilogy very dark — I stopped after book two (my husband loves all of Lawheads books, though). Same with the Tales of Goldstone Wood. I’ve heard nothing but good things about that series, but again, I didn’t make it past the second book.

I might have to look up The Chornicles of Prydain, though, and I love the whimsical covers of the Earthsea trilogy! The Thief Series sounds interesting, too, and I think Dealing with Dragons is already on my TBR list.

Interesting. “Dark” is not a word I would use to describe the Song of Albion trilogy. Thanks for the perspective! Veiled Rose and Moonblood are quite dark, I agree about that. If you found Song of Albion dark, you will probably think Earthsea is too dark, as well… some parts of Tombs of Atuan can be pretty scary.

Keeping that in mind, I definitely think you’ll enjoy Dealing with Dragons. You might also enjoy the Magic Kingdom of Landover by Terry Brooks. Starts out kind of sad (the main character’s wife has recently died and he is understandably depressed), but apparently buying a magic kingdom is just what the doctor ordered! Equal parts adventure and whimsy ensue. The Thief series is quite good. Umm… OOH! You would probably really enjoy Kendra E. Ardnek’s Bookania series. Fun, whimsical, based on every fairy tale imaginable, all conglomerated into one fast-paced adventure of fun.

Ooh, lots of good books! I recently started reading the Goldstone Wood books and I love them! The allegory is so well done and I love the characters.

I know! Every book she comes out with becomes my new favorite (shhhh, don’t tell the others!)

Thank you so much for all of this

I am not exactly new to fantasy, but it’s a genre I neglect all the time, so I want to find some solid reads to start with – especially more clean/Christian ones!

You’re welcome! I’m always happy to help a fellow reader find some new fantasy books to dive into! I have tons more recommendations, so if you’re ever at a loss, or come across a title you’re curious about, feel free to shoot me a note or comment. I definitely haven’t read every fantasy book out there, but I’m familiar with lots of them!